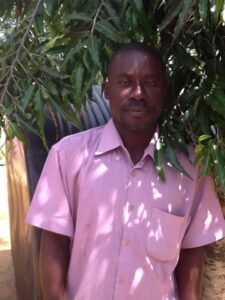 As a farmer I started the project by providing food for children who missed school because they did not have food at home. As a result, the children left their own homes to fend for themselves – basically looking for wild fruits from the nearby bushes and forest. The problem of hunger was very widespread in the community. These were mostly children from the neighbourhood who I would see playing under the cashew nut trees near my farm. Their plight touched my heart so I began giving them food and gathering them together to teach them as much as I could given my busy schedule as a subsistence farmer.

The number of children who did not go to school was increasing so rapidly that I really got concerned. Most of the children who did not go to school were orphans who were left without care and protection after either both or one of their parents died. The extended family system, which was expected to take care of these children, was fast crumbling due to pressures of modern-day living that no longer could sustain the reality of large families living together. Families were breaking into smaller units and most young people were moving away to nearby towns to seek employment, in a bid to deal with the increasing poverty levels at the village level.

This state of affairs saddened my heart so much that I decided on my own to mobilize the children and bring them together to give them love and find ways of restoring their hope by providing them with the very basic needs including education and protection. This was the birth of Magarini Children Centre and Organic Farming Demonstration Farm (formerly the Magarini Orphan Care Initiative). I particularly fought for the girls in the community for they face greater challenges compared to the boy children. The community practices early forced marriages, so the girl child is indeed an endangered species among the Giriama. I am working tirelessly to ensure that girls are given equal opportunity in education just like the boys, as the community gives first priority to the boy child.

I purchased about 8 acres of land and donated the land to the children. At present the organization provides a home for 120 children, 40 of whom are orphans and the remaining (80) are vulnerable and marginalized children whose parents live in extreme poverty and exclusion in the community. Thanks to this initiative, all the children in the program can now access education, care, protection and have new hope for their life. We have created an environment where children can grow and live to their fullest potential. The project is run by volunteers from the community and the children themselves are very active in learning sustainable ways of growing food and caring for each other. In essence the Magarini Children Centre and Organic Farming Demonstration Farm is quickly redefining how people should live together. This is my definition of LOVE.